In case if you missed the previous posts. You can read them below. Note that this post is rather a review than a how to switch, so stay tuned and wait for part IV. where I’ll talk about OpenVPN, L2TP/IPsec, Printing, and things that aren’t working properly.

I read a lot of posts about what’s the best Chromebook. Just to mention a few:

I read a lot of reviews about the older models and the brand new ones too. I wish I could buy all of them. But I can’t just spend a lot of money. And their biggest pro is that they’re inexpensive - compared to other notebooks of course. So you only need one. But which one you should buy?

Mostly all posts agreed that the Toshiba Chromebook 2 is the best after the Google Pixel 2.

You need to know what is the best. Toshiba released 4 Chromebooks in 2 years.

This is the first Toshiba Chromebook 2. Customers bought it were pretty satisfied. It does not have a fan! So it’s pretty quiet, but the CPU speed is limited. Read the PCMag review here.

The last 2 model is almost the same. The only difference is the CPU. The CB35-C3300 has Intel Celeron 3215U. You can buy with a faster Intel Celeron i3-5015U8 CPU, but reviews say: It does not really worth it, it only reduces the battery life and you won’t really feel the difference.

The Chromebook you definitely want to buy is the Toshiba CB35-C3300 Chromebook 2.

If you live in US, you can buy the C3300 for about $300 USD. If you live in Hungary just like me, it will cost $299.99 + $123.69 Shipping & Import Fees Deposit. Amazon handles everything for you. You’ll get it in no time, which means about a week. Since there are absolutely no Chromebooks in Hungary you can’t even try it out first, so it was a pig in a poke. How excited I was when it arrived.

In part I. I already covered the Acer specs and the first user experience, so if you’re interested, read it now. But just for sure I’m going to show you a few sexy photos about the Acer C720P to catch your attention. 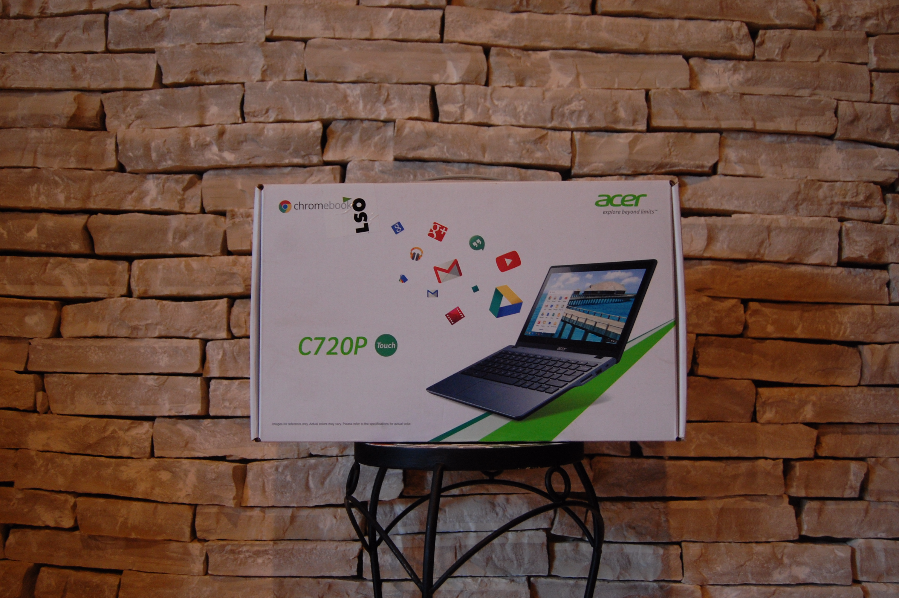 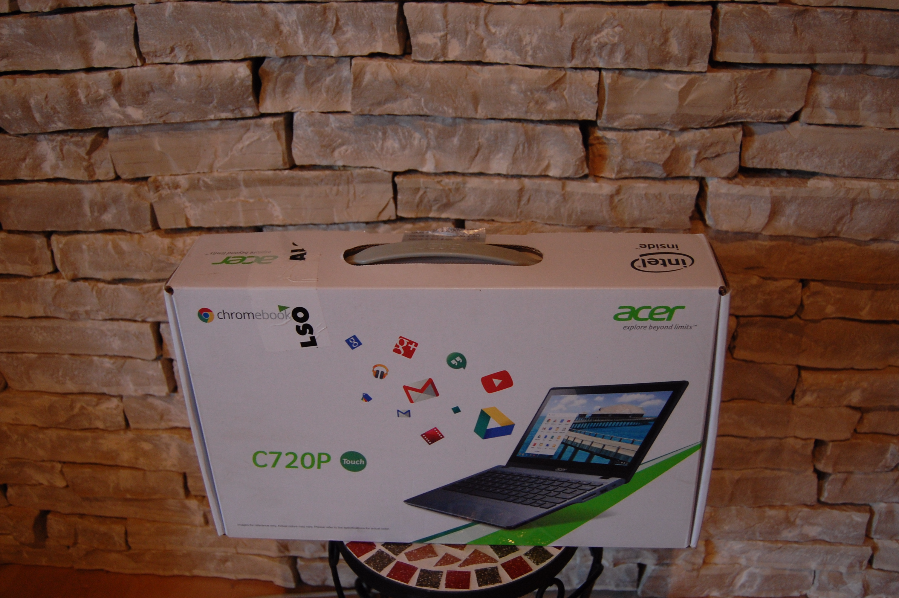 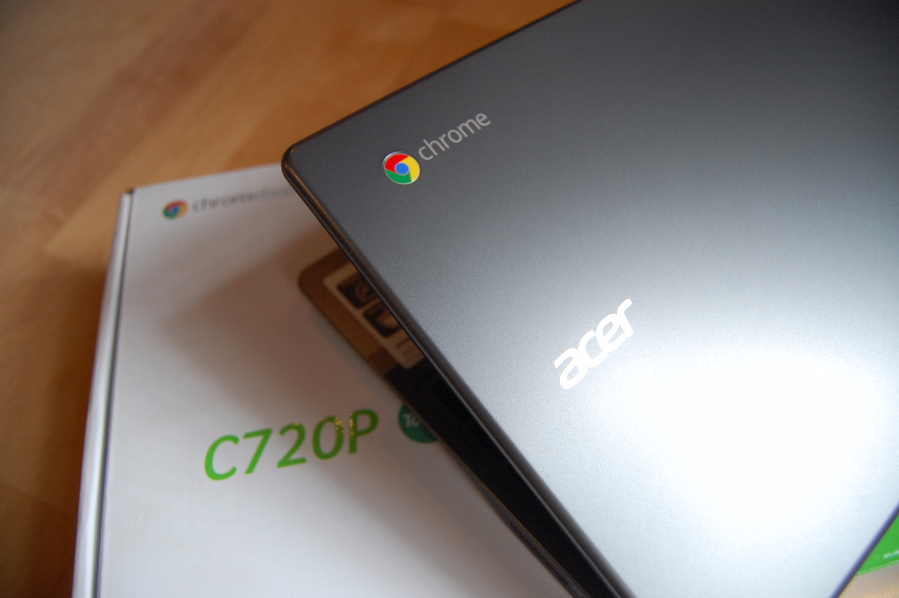 In case if you’re interested in it… well I’m not using it anymore so you can buy it. I only used it for about a week and Powerwashed it.

So back to Toshiba. I was pretty excited when it arrived. I quickly removed the wrapping and saw “the box”. 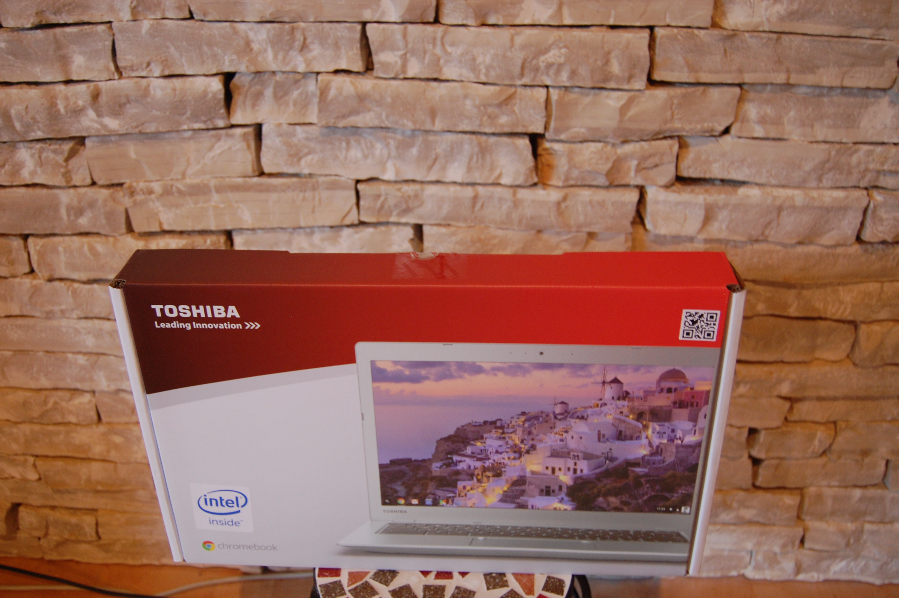 The box foreshadows that it is much bigger than the Acer, meanwhile even the box is so thin. The Acer’s box is less thinner. Strange. 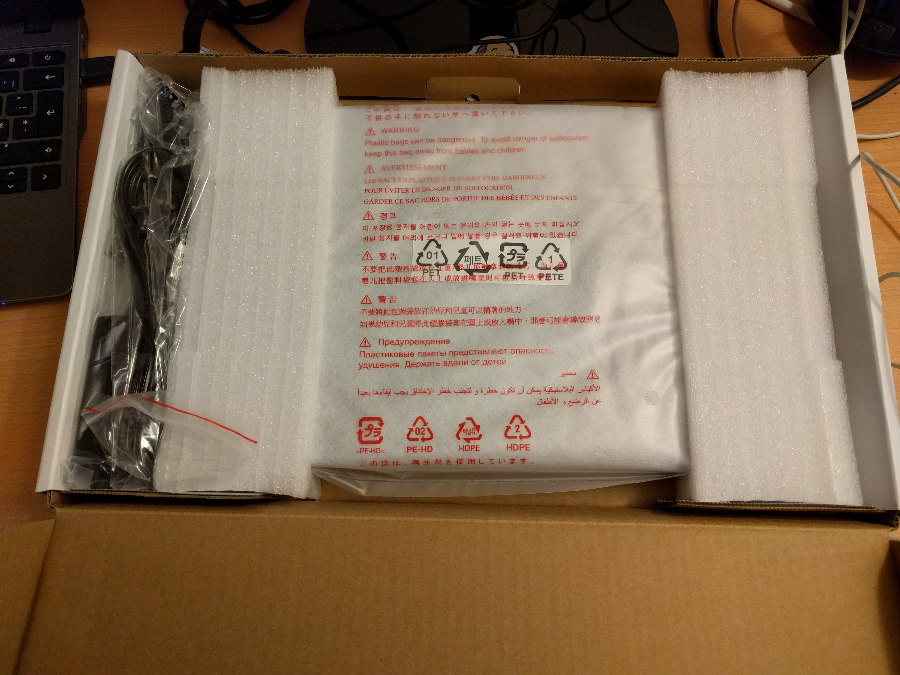 Inside the box you’ll find the power cable (US type), documents, and the chromebook itself. Everything is properly covered and packed. 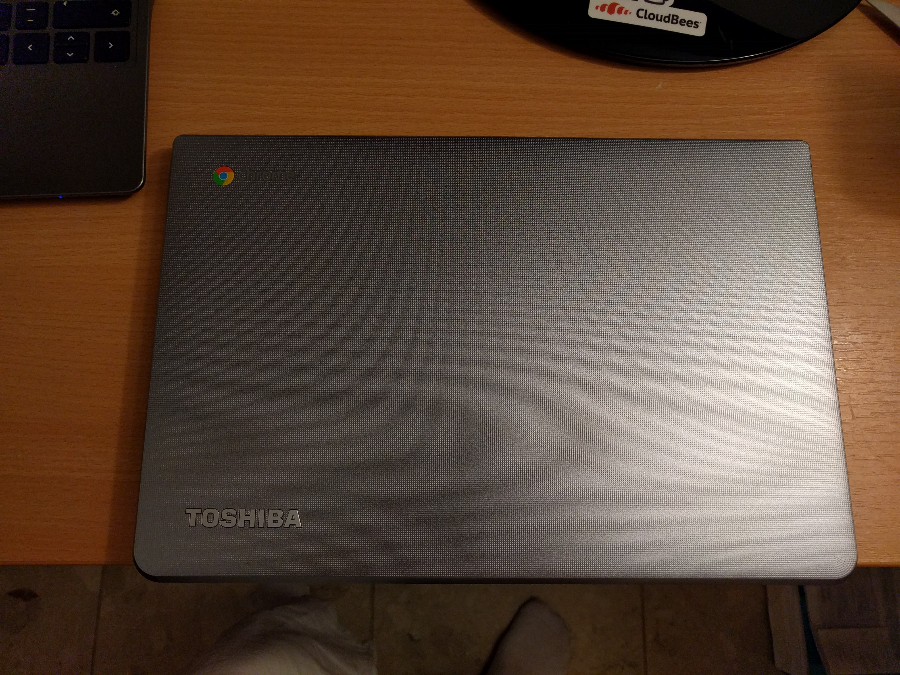 The material is plastic. The previous ones were less plastic-feel, but it won’t annoy you. What is a bit annoying is that the edges are a bit sharp. The top material is bumpy. 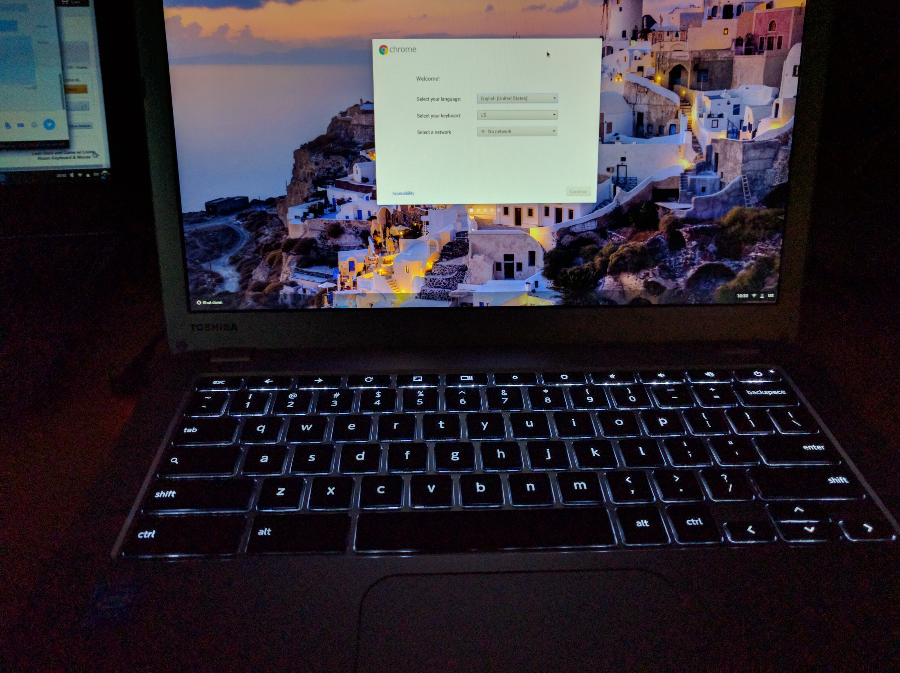 The backlit keyboard feels like your MacBook Pro. I’m not joking. I immediately switched off the lights and increased the backlit. It’s so smooth when you type. As I mentioned before I’m a dvorak typist so the keyboard has a very high priority in my life. If the keyboard is not comfortable I won’t be able to type hours on it. Of course I could still attach my Apple Wireless Keyboard to it via bluetooth, but I’d rather not do it.

You only need to get used to the shape and location of the enter. Also the backslash is a bit too right, but still can easily reach it with my fourth finger. 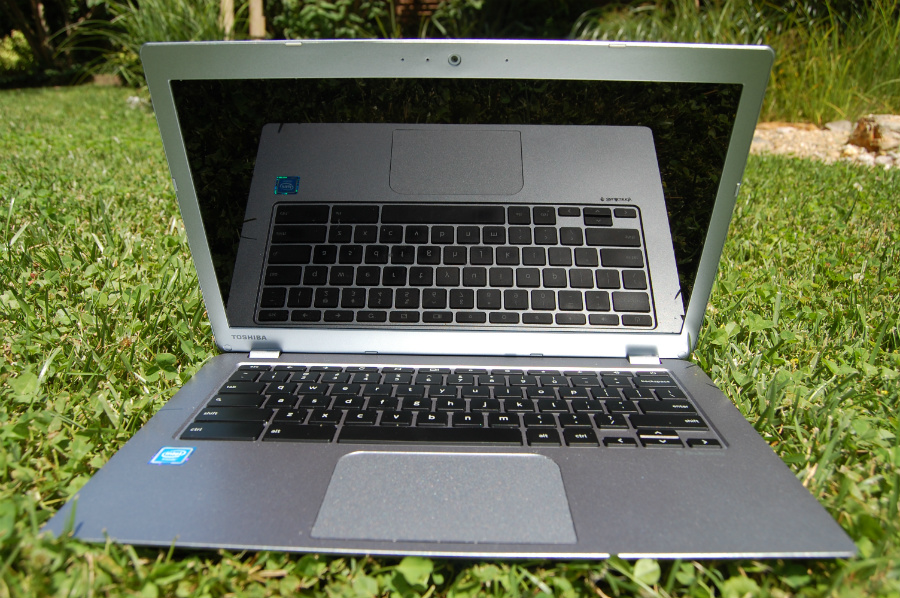 The screen in gorgeous and beautiful! I has a full-HD resolution of 1920 x 1080, but it can do 2400 x 1350 too. This won’t be to everyone’s tastes. Text, buttons and other items on screen do look a fair bit smaller. If your eyesight isn’t the best you may find yourself zooming in or manually switching to a lower resolution so you’re not constantly squinting.

If you aren’t using an external screen, you would need to use 125% zoom on all sites to be able to read the text. But I can live with this, it’s not that annoying. Customers are complaining about the small text, so probably in a few months there will be some fix. The icons can’t be enlarged, so sometimes it’s hard to find the app you want to launch, because they’re so small.

In terms of dimensions it has the same dimensions as a MacBook Pro 13” but it weights less. See the photos below. 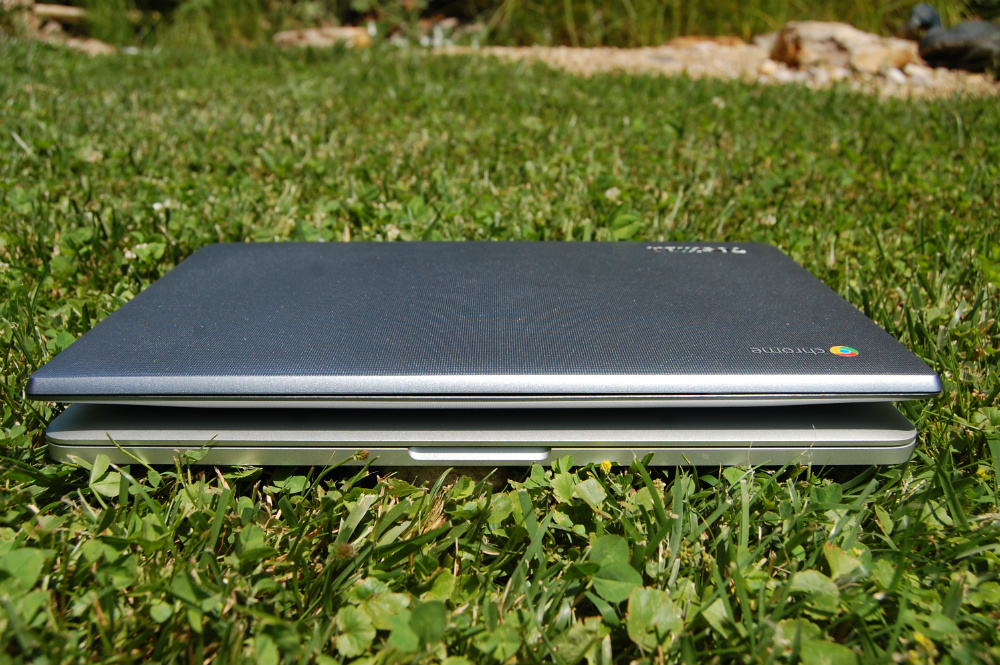 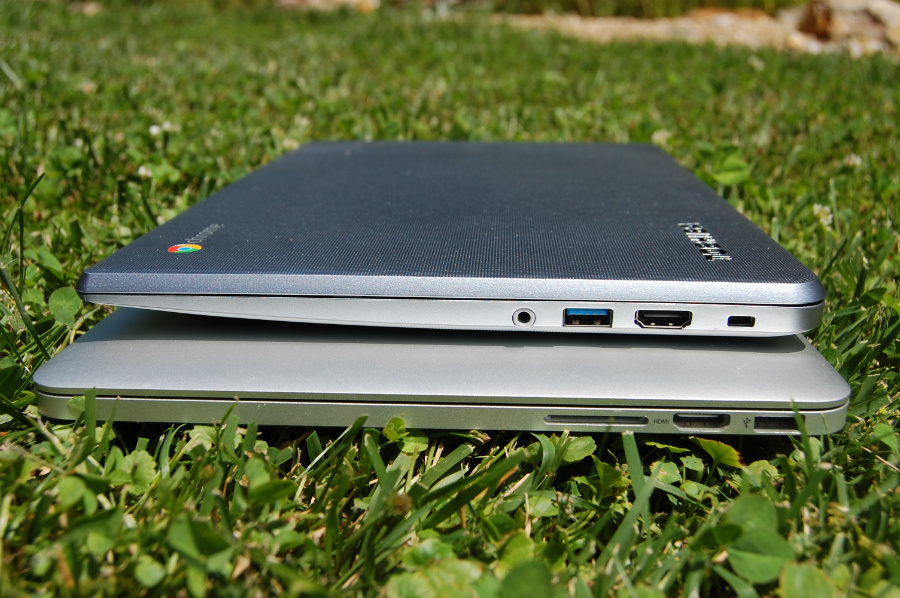 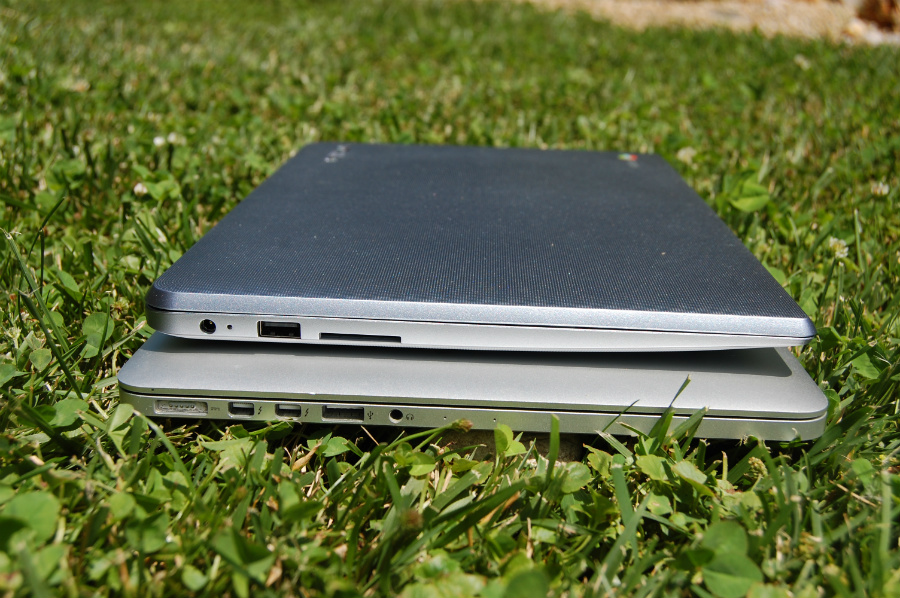 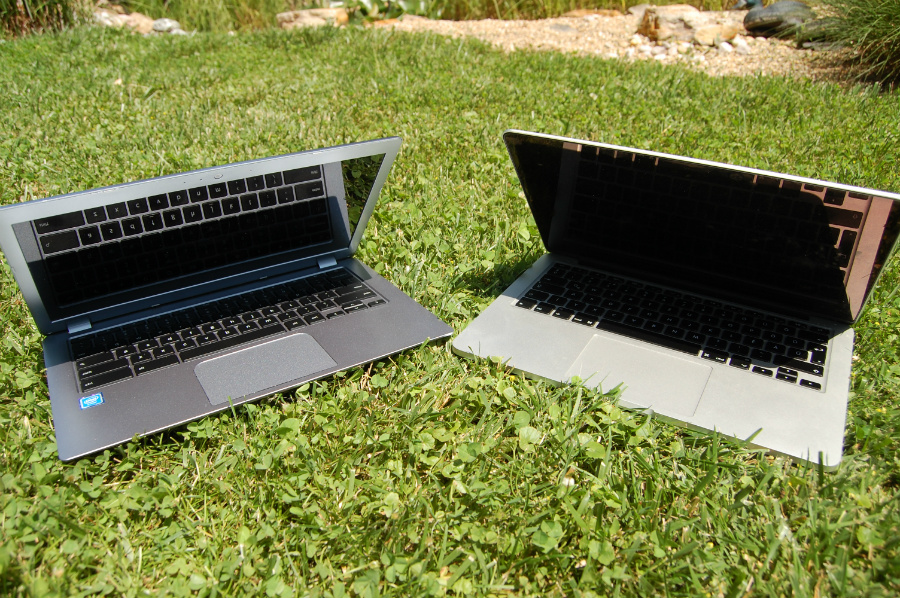 A big kudos to the Toshiba team for building such a great machine. The sound is perfect! Toshiba teamed up with Skullcandy and built the speakers behind the keyboard. But somehow it sounds like a hifi system. Just look at the Skullcandy logo, it tells everything. 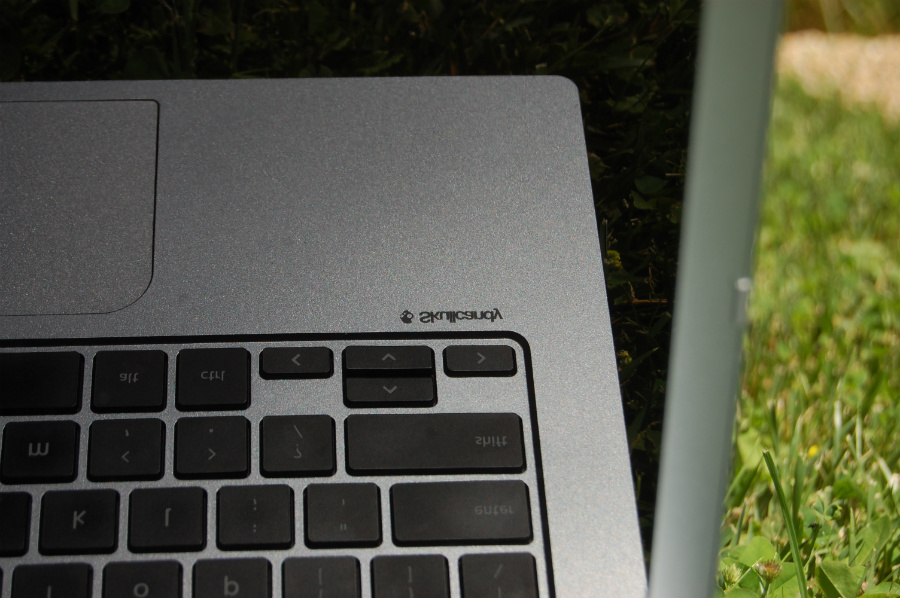 So it has USB 3.0 and 2.0, a SD Card reader and a HDMI. Almost enough. I hope they’ll include USB-C in the next model, and I would like to charge it via an USB-C port just like the Google Pixel 2. I have a Nexus 5X and I’d be happy to charge my phone using my Chromebook.

Note that it comes with the US power cord, so in case if you want to use it in Hungary, you need converter slots. Luckily I have a lot since we travel a lot to US and Japan, so it’s not a big issue. What’s more I use more US cords than EU cords.

Some ask how I can live with 4G memory only? Well to be quite honest I have around 23-40 tabs open all the time, listening to youtube without any problem at all. I feel it fast, no slowdown. On the Acer C720P I felt the slowdown after ~10 tabs, but I haven’t felt it on the Toshiba.

The only thing you’ll notice is that after a few tabs, the fan will start to spin. It’s pretty quiet, but can be annoying in a very quiet room. I haven’t got used to it yet.

I’m very satisfied with this Chromebook. I just feels like a Mac, but it’s not. It’s way less expensive and the IPS Full HD screen amazes me every time when I switch it on. If you’re thinking about buying a Chromebook you should buy only this and not anything else.

Note: If you live in Hungary and want to see a Chromebook with your own eyes and try it out, you can ping me and I can show you somewhere in Budapest.