The biggest question ever asked about Chromebooks: How can you use code on it, how can you run shell scripts and other things. Without enabling Developer mode, your best option is to use a Cloud IDE. Let me show you one.

Cloud IDE is a trendy thing nowadays. It’s especially useful for us - Chromebook users. We can’t have fancy IDEs like IntelliJ, Sublime, Vim, etc. We need to use online editors and online services to edit files, run commands on a linux box and so on.

You can of course use a the Secure Shell Chrome App as an altervative, but it does not support SSH key auth, and is pretty limited. I did not like it, because I don’t want to use password auth, I did not find it secure enough.

There are actually four Cloud IDEs worth to mention at the moment:

I’m using Cloud9 IDE since I migrated to a Chromebook, so I wanted to try another one. Codeanywhere pinged me on Twitter about a week ago and they actually forced me to try out their product. I had already registered an account, so I decided to use it for at least a week.

@wooh_tw Have you tried our our Cloud IDE? Would love your feedback? Thanks!

A very important part is the pricing. Don’t get me wrong, I love to pay for good a good service, but I don’t like to pay for something I don’t need. This is why it is important for a company to have a good pricing strategy.

Codeanywhere has a free tier which includes the following features:

It means I can use the Web UI from any notebook - including a Chromebook of course - and from mobile devices too. The web-based SSH or Terminal Console makes it possible to access any Secure Shell (SSH) servers through Codeanywhere, what’s more I can edit the files using the Codeanywhere Web Editor directly from any FTP, FTPS or SFTP based server.

Also I get an ubuntu/centos box with 256 MB memory / 2 GB disk space which is more than enough usually. Note that the container won’t run 0-24 (Always on), that feature is available only from the “Freelancer” plan.

So actually what I do is: I connect to my server using SSH and I’m editing the files there, so I don’t really need the Container provided by Codeanywhere at all. But just for sure the my development environment is also set up there, I just haven’t copied my secret keys yet. On demand I could do that.

I can use a lot of services via Codeanywhere: 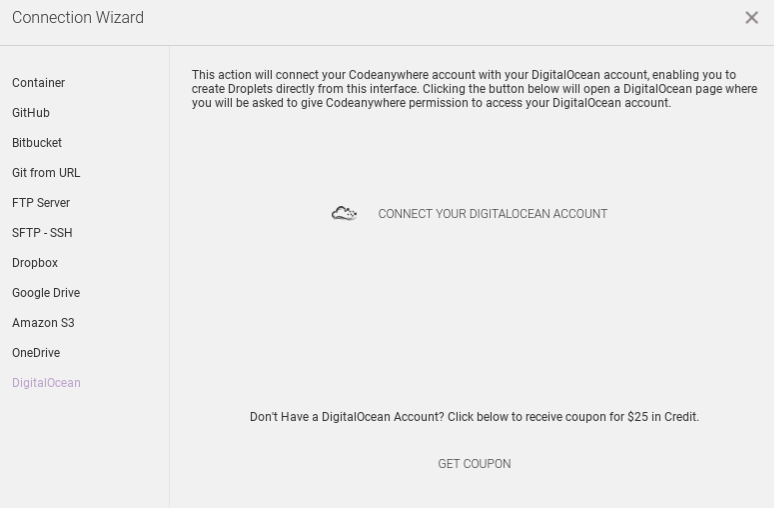 When you use the Codeanywhere Container instead your own box, you’ll be given a specific hostname and ports 1024-9999 to check your service/website whatever you’re working on. Note that your container won’t run all the time while on a free plan.

The idea behind the “one container per project” is that the containers are cheap, easy to launch and you can separate your work from other things. I’m not a big fan of this setup, but sometimes it could be handy, but for now I don’t feel the need of it.

So in general, I like Codeanywhere, but - just like any other software - it has bugs or annoying features. Let’s see the pros and cons. Let’s start with the cons. Not all of them are real cons, rather incompleteness.

After about a week usage I’m still satisfied. Apart from the few annoying bugs like the copy and paste it really convenient and seems to be stable. During the 1 week period it was always reliable and available. I did not have any connectivity issues which is great.

All I had to do is copy the my codeanywhere public SSH key to my server and that’s all. I also added it to my GitHub repo, so I can checkout code.

For security reason, I’m not using the codeanywhere container for private repos, only for open source development. I use my own server for private projects. We all know how hard to secure a docker container, I don’t want to be surprised… :)

For me the free plan is absolutely enough but if you plan to use it heavily, you would need to sign up for the Freelancer plan, which isn’t that much. Just do the math:

If you sign up to the Freelancer plan and use the containers provided by Codeanywhere you’ll get:

Note that there is also a free trial option for the Freelancer plan. In overall you’ll get a lot for just $7. It worth to subscribe to the Freelancer plan than using your own droplet at DigitalOcean with a Free plan at Codeanywhere.

To sum it up: Codeanywhere offers a pretty good service for all Chromebook users. Good job guys, keep up with the good work and I hope the items in the Cons section will be soon fixed/eliminated.